The Scottish Memorial Cairn is located in Sinclair Park, it pays tribute to the district’s pioneers, later generations and families whose endeavors have contributed to its success since the 1830s. 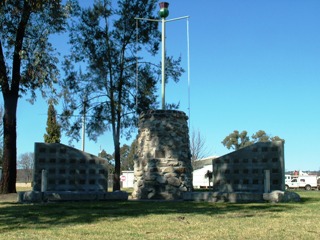 The Scottish Memorial Cairn is located at Sinclair Park Glen Innes Road Inverell and pays tribute to the achievements, commitments and contributions made by the districts pioneers, later generations and families whose endeavors have contributed to Inverell’s success since the 1830’s. The memorial was dedicated on the 23rd of October 1999, in conjunction with Inverell’s annual Sapphire City Festival and was also the year in which the Inverell Shire Council adopted the Clan Mitchell Tartan. A special feature of the memorial is the inclusion of two Scottish stones of historical significance, both about 200 years old and formally belonged to the original structures of the Scottish and Newcastle Brewery Headquarters. These two rocks are approximately 14″x 6″x 4″ and one piece broke into two during the flight to Australia. These historic rocks were secured by the initiative of Cr Betty Moore.

The cairn’s side walls provide locations whereby people of Scottish descent can record their ancestors and later generations involvement in the exploration, pioneering, early settlement, ongoing progression and success of the town and Shire of Inverell for some 170 years by the attachment of individual Clan and/or Family Bronze plaques, which were organised by the Inverell Scottish Association Inc and manufactured by the Uralla based, Phoenix Foundation Pty Ltd. At the base of the cairn, feature stones depict the four compass points, North, South, East and West. These oblong Black Basalt stones were part of the largest and lastly constructed of Colin Ross’ stores, a pioneer of early Inverell. The side walls (southerly aspect) contain silhouettes of a Scottish Piper and Scottish Highland Dancer. A Commemorative bronze plaque is attached to the cairns northerly aspect. Inverell is proud of their Scottish heritage and are honored to have such a memorial in place.